Eye care professionals specialize in understanding how the human eye really works, as well as diseases and conditions that affect your vision – many of which do not have obvious symptoms. Eye doctors know how age and risk factors affect vision over time for young and old, and they understand the benefits and features of corrective lenses including eyeglasses and contacts.

Our optometrists takes the time to explain the results of your eye exam, describe your options and listen to your eye care needs. Because maintaining good eye health is an ongoing partnership, we encourage you to ask questions and share your health information, which could be vital to monitoring, diagnosing and treating potential vision problems.

A direct descendant of one of the founding members of the community, Dr. Anderson was born and raised right here in Cardston. After spending time studying in Lethbridge and at Brigham Young University in Provo Utah, Dr. Anderson attended Optometry School at Southern California College of Optometry where he graduated in 1979. He started practicing in his hometown in Cardston in 1980 and has spent the last 37 years loving what he does and serving this community. He has built lasting friendships and relationships with his patients and loves to provide for all their vision needs.

When he is not at the office Dr. Anderson enjoys spending his free time working in his yard, and spending time with his 9 children and 19 grandchildren. He now looks forward to practicing with his son Dr. David Anderson and growing his practice.

Dr. Dave as his patients call him was born and raised in Cardston. He will tell you he always knew he wanted to be an eye doctor ever since he had his eyes checked by his father as a little boy. After studying a few years at Brigham Young University Idaho, Dr. Dave spent his final years of undergraduate studies at Pacific University in Oregon, where he received his Bachelor of Science in Vision Science. He also attended Optometry School at Pacific University graduating with distinction in 2017. During his final year of training, Dr. Dave was able to spend time working in a variety of eye care settings, including hospitals, diagnosing and treating ocular disease, as well as in private practice working with binocular vision specialists, where he was able to apply some of his training in vision therapy.

When he is not at the office, you will find him spending time with his wife Breanne who is also originally from Cardston, and his 2 year old daughter Olivia (Livy). He also enjoys playing hockey, softball, golfing and most recently curling. He spends some of his time volunteering with the local Lions Club supporting their mission to eradicate preventable blindness. He looks forward to putting down permanent roots in the wonderful community where he was raised. 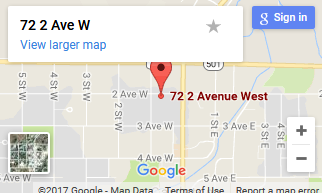